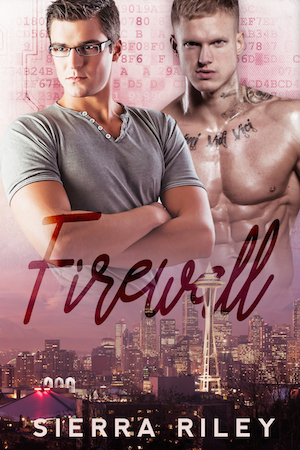 “I made more enemies than friends.”
Justin West is one of the world’s most sought-after IT security specialists. His skills as a network penetrator are renowned, but in meatspace he’s cold and awkward. Online he’s at the top of his game, and who needs soft skills when you’re top dog? But in a cutthroat industry, enemies abound, and Justin is framed for a massive security breach. Soon it’s not just his job on the line; his very life is in danger.

“If I can’t keep you safe, what good am I?”
Bodyguard Calder Lesley takes pride in his career protecting others. In contrast to his geeky hotshot best friend, Calder uses body language and psychology to excel at his job. He only ignores his instincts when it comes to Justin. Even though their friendship has been long distance for eight years, Justin’s feelings for him are obvious. Calder’s afraid of nothing… except losing a friend to pursue a new kind of love.

“We’re both in danger unless we act now.”
It’s a fight to the death to keep Justin’s fledgling firm alive. He’s eating humble pie a few bytes at a time, and needs the help of someone he can trust with everything, including his life. For the first time in nearly a decade, they’re back on Calder’s turf: face-to-face. As his new PA and bodyguard, Calder protects him and stops him from making more enemies. The sparks fly as jealous enemies beat down the door. Opposites might attract, but can they last?